Flying Imps resemble green Imps with slightly more teeth, a longer tail and a pair of rounded wings. They have red eyes.

Flying Imps can attack in large groups and will always remain airborne, even when they become dizzy. A flying Imp's basic attack is by coming up to Cooper and swinging their wing at him, decreasing 1 hit point if he is hit. Later into the game, Flying Imps gain the ability of diving themselves towards Cooper with the end or their tail pointed. When they do this their tail will grow to a large size and have a purple glow until they hit the floor and their tail returns to normal.

This attack can decrease 3 points, and whether or not a Flying Imp hits Cooper or any other Ghouly with this attack it will be stuck to the ground, leaving it vulnerable to a knock-back attack until after a few seconds when it will get up again.

A Flying Imp in the Chapter 3 title card. 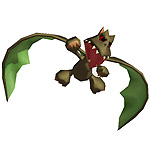