The Hunchback is a boss Ghouly that first appears in the second visit to the Boathouse in Chapter 2. He has 70 Energy and is the thirteenth ghouly encountered in the game.

The Hunchback is a trollish looking man with a large hunched-back that deforms his head down to his torso. He has large, muscular arms and rather small legs compared to the rest of his body. He has a large chin with several sharp teeth from his lower jaw, a round nose, two eyes with black pupils and he is mainly bald with the exception of a few brown hairs sticking from his head and chin. He wears a green shawl with patches and ripped edges over his bare hunch and a pair of ripped up, brown pants with a piece of rope tied together, keeping it in place with his bare legs and feet exposed.

The Hunchback is a boss ghouly who's encounters with Cooper will start as a surprise during a room. Unlike other Ghoulies, the Hunchback is purely defensive, instead of offensive. Even though the Hunchback will point and pound his fist at Cooper from a good distance, he will just run off like a coward when Cooper gets close enough. The only way to defeat him is to hit his 'handsome' face that he will completely cover as soon as Cooper reaches him. When Cooper is right at his presence he will just stand with his face pointing the opposite direction and will just move around to another direction if Cooper tries running around him.

Hitting any part of his body other than his face will not do any damage but he will react to it and by continuously hitting him, Cooper will be able to work around his body to his face. Knocking him back will cause him to either lie on the floor with his hand on his face or sit the floor, also with his hand on his face (both making him invulnerable). When that happens, Cooper should back away for a few seconds and wait until he gets back up again and runs toward a different place in the room to taunt Cooper. The Hunchback has but one attack that is used less than often. This happens when Cooper hits him so much that he rolls himself up, using his hands to completely cover his face and if Cooper hits him enough he will turn red and spin himself towards Cooper with his fist out, an attack that does 10 Energy worth of damage if hit. Cooper can outrun the Hunchback and stay safe for the few seconds when he eventually slows down and gets dizzy from spinning, causing him to stop. The Hunchback's tactic seems more time-consuming than deadly, putting obstacles in the Time Taken score.

The Hunchback has his own theme that is played during challenges with him. It is used during all four scenes he appears in. 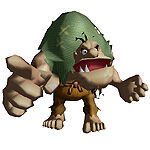 The Hunchback in the Chapter 2 Title card 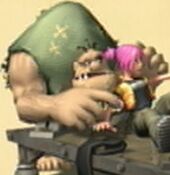 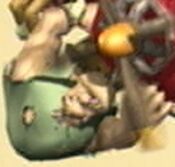