The Spider is a breed of Ghouly that are first encountered in the first visit to the Lower Corridors in Chapter 1. Spiders have 10 Energy and are the third ghouly encountered in the game. They serve only as low-tier enemies and appear in the game often. They are of one of weakest ghoulies in the game in both health and damage, second only to Imps.

Spiders are fairly large in size compared to real spiders but are rather easily to defeat. Spiders appear as four-eyed tarantulas with brown and yellow stripes coming vertically off their legs, thorax and abdomen.

Spiders are some of the most common ghoulies in the game and can appear in groups as large as 30, infesting both interiors and grounds of Ghoulhaven Hall, but mainly places like the Garbage Yard and the Basement. Being Spiders, they also are seen sometimes hanging off walls and coming down to attack when Cooper comes close. They have high-pitched voices (noises consisting mainly of 'whee' or 'eee' and even giggles) and appear to have a very cheerful attitude, hopping with one set of legs then hopping to the other if witnessing Cooper's failure (being knocked back or summoning the Reaper), and moaning with their front legs touching their face when if witnessing Cooper take out another ghouly.

Spiders attack by launching themselves in the air, forming a ball out of their body and throwing themselves at Cooper, an attack that decreases 2 energy if hit. It's rather easily to take them out and the likelihood of being hit by a Spider is less likely than that of an Imp because Imps can just attack directly while Spiders take seconds and can be defeated without losing energy because Cooper just can hit them when their airborne, though they can prove troublesome when fighting groups of 3-4 Spiders at once (or simply other ghoulies at the same time) as one can hit you when you're beating the others. Also, if a Spider manages to successfully hit Cooper it would perfectly bounce back on it's eight legs while if it misses it becomes dizzy.

Later in the game, Spiders will have gained the ability to spit a formed web on the ground, only taking a few seconds to form them (thought they are vulnerable at that time). Anything on the web will be significantly slown down (a rate even slower than Slo-Mo Cooper), which can be fatal especially when the Reaper is around. However, anything else except Spiders can also be slown down, including the Reaper. Of course, after several seconds, the web will disappear.

Spider have their own theme music that is only played once in the game in the first visit to the Garbage Yard. 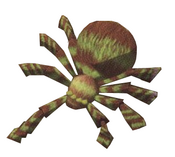