Zombie Pirates are blue-skinned, overweight male zombies with several visible bruises, a bald head, a black beard around his chin, a round nose and what appears some skin missing from the right side of his check, exposing his teeth and gums. They wear a black eye-patch on their right eye, a brown, ripped-up coat with golden buttons and it's left sleeve missing while the right is rolled by with a cufflink. They have a black belt with a golden buckle, red pants with yellow stripes and a left, wooden peg leg. They also carry a large cutlass with a golden handle.

Zombie Pirates take on the stereotypical attitude of a pirate, saying "arr!" whenever hit. They appear to be part of a crew, led by their captain. They have been shown to have some intelligence superior to other ghoulies, being able to talk and sometimes command other ghoulies to do their bidding. Zombie Pirate also sometimes will get out a brown coloured bottle and drink out of it, leaving them burpy and vulnerable, however, if hit they will turn red for a few seconds (making them invincible for that time), maddened, they will use their third attack (see third paragraph).

Zombie Pirates use a basic combo against Cooper, first when getting close enough they will kick him with their peg leg (costing 1 Heart Point each kick). They will do this three times before Cooper becomes dizzy and they charge at him with their cutlass, which can decrease 5 Heart Points if it hits him. Cooper can though catch his senses back and hit him for that brief 2 seconds when he charges. Sometimes, a Zombie Pirate can just charge with his cutlass without even needing to use his peg leg.

Later in the game, by the start of the second visit to the Kitchen, Zombie Pirates will have gained the ability to throw treasure chests at Cooper. They do this by first, at a distance, place their cutlass on the floor and then taking out the treasure chest out of nowhere, and then yelling "Pieces of Eight" before tossing it. The chest is brown with a golden lock and gold coins will spill when it breaks. This attack does 6 Heart Points worth of damage.

Like Zombies, they can be easily drained of Heart Points when the Holy Water Squirter is used on them, making them decolorise and drop down dead as they disintegrate.

Zombies have their own sub-story throughout the game. Starting with their Captain in the Dining Room where he orders a large number of Zombie Pirates to attack Cooper. After defeating the Captain, Cooper has another encounter with their wrath when he defeats Roger the Cabin Boy in the Farmyard, causing a horde of ghoulies to attack him. Later into Chapter 5 in the second visit to the Dining Room, a number of Zombie Pirates confront Cooper after he freed the prisoner who was treated as prize pig.

Zombie Pirates have their own theme music played during challenges.

It is played twice in the game, both in all two visits of the Dining Room. It is also featured in the Trailer. 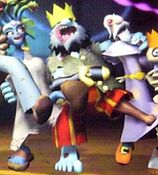 A Zombie Pirate in the Chapter 2 title card